Crash Protection For Alphabet As Google Faces 'A Tsunami Of Litigation' 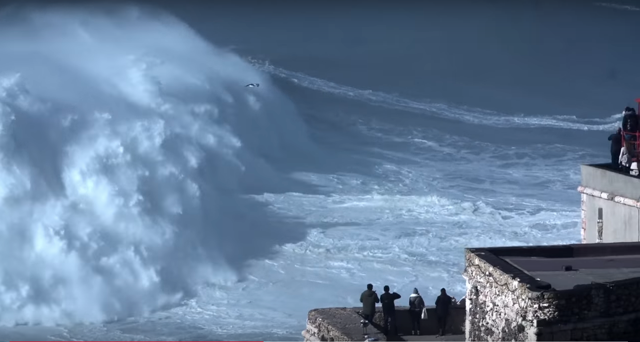 In Saturday’s Financial Times, Aliya Ram reported (online version paywalled here) that Alphabet’s (GOOG) (GOOGL) subsidiary Google was facing £1.5 billion (about $1.97 billion) in litigation after European Union rulings against it. That litigation, a planned €500 million ($565 million) lawsuit by German price comparison site Idealo and over €1 billion ($1.13 billion) in lawsuits by British price comparison sites Foundem and Kelkoo (both on hold pending Google’s appeal of the EU’s €2.4 billion fine for giving itself an “illegal advantage”) may only be the beginning. Ram quoted Kelkoo CEO Richard Stables the potential scope of follow-on litigation:

Given the size of the industry before Google and where it is now, there is literally billions in lost value that companies could go after Google for.

Google’s anti-competitive practice devastated an entire market… it is therefore not surprising that Google is facing a tsunami of litigation.

My site is currently bullish on both classes of Alphabet shares, based on its analysis of total returns as well as options market sentiment. That said, with Google facing lawsuits from these price comparison sites, as well as potentially from other browser and search engine companies, some Alphabet longs may want to limit their downside risk. We’ll look at two ways of doing so below.

For these examples, I’m assuming you have 100 shares of GOOG and can tolerate a decline of as much as 20% over the next several months, but not one larger than that. The screen captures below are via the Portfolio Armor iPhone app.

As of Friday’s close, these were the optimal, or least expensive, put options to protect 100 shares of GOOG against a greater-than-20% decline by late September. 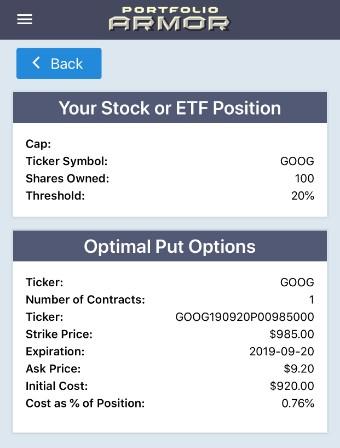 The cost of this protection was $920, or 0.76% of position value, calculated conservatively, using the ask price of the puts (in practice, you can often buy and sell options at some price between the bid and ask).

If you were willing to cap your possible upside at 16%, this was the optimal collar to give you the same protection against a >20% decline over the same time frame. 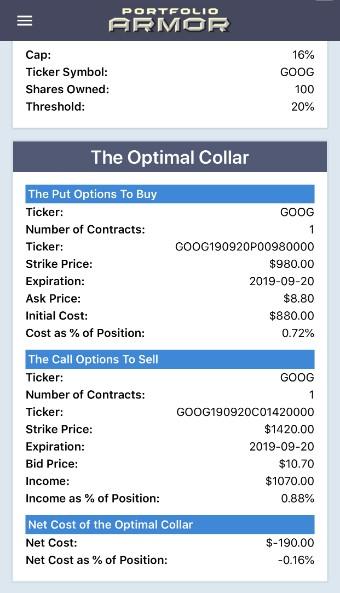 One difference with this hedge is that the put leg is slightly less expensive. After an iterative process taking into account the net cost of the collar, the hedging algorithm was able to use the $980 strike puts in this case, the cost of which was $880, or 0.72% of position value, calculated conservatively, at the ask. Another difference is that the cost of the put leg was more than offset by the income generated by the short call leg of $1,070, or 0.88% of position value (calculated conservatively, at the bid).

So the net cost of this hedge was negative, meaning you would have collected a net credit of $190 when opening this collar, assuming you placed both trades at the worst ends of their respective spreads.

For those unfamiliar with typical hedging costs, I should point out there that GOOG is inexpensive to hedge here. By way of comparison, as a percentage of position value, it would cost about 2.4 times as much to hedge shares of Facebook (FB) against the same 20% decline threshold over the same time frame. What that suggests is that options market participants remain sanguine about the litigation threat facing Google. Given the low cost, it may be worth hedging in case that changes, or GOOG shares decline sharply for some other reason.

To be transparent and accountable, I post a performance update for my Bulletproof Investing service every week. Here’s the latest one: Performance Update – Week 72.

Disclosure: I/we have no positions in any stocks mentioned, and no plans to initiate any positions within the next 72 hours. I wrote this article myself, and it expresses my own opinions. I am not receiving compensation for it (other than from Seeking Alpha). I have no business relationship with any company whose stock is mentioned in this article.