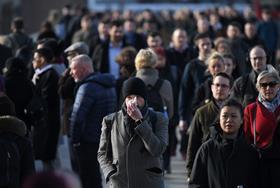 Thousands of high street and sole practitioner firms may shut within six months as a result of the Covid-19 crisis, alarming new research by the Law Society suggests. Cash flow pressures and lower fee income have put more than half of all the legal practices in England and Wales at risk.

The finding is extrapolated from a survey of nearly 8,000 small firms conducted in March and April, to which 10% of practices responded. One in five said they were already feeling the squeeze on cashflow and fee income. Some 63% of sole practitioners and 71% of firms with four partners or fewer said such pressures could put them out of business by the autumn. As a worst-case scenario that would equate to over 5,000 firms ceasing to trade, if the 774 respondents are a representative sample of the sector.

‘The shock to the legal services sector has been sudden and severe,’ commented Law Society president Simon Davis. ‘There are widespread concerns over liquidity as firms face a dramatic plunge in income with work falling away.’

He added: ’Although a firm may be open for business, this does not mean it is business as usual. Residential property transactions have ground to a halt. Reduction in court hearings has massively impacted on the amount of work available – while social distancing and the lack of face-to-face meetings is causing difficulty delivering in other areas, such as the execution of wills.’

Elsewhere, small firms have suffered from the decline in activity from service industries such as retail, leisure and hospitality.

Chancery Lane continues to lobby government for extra help, noting that law firms are specifically excluded from some support measures for other small businesses. They are still expected to pay business rates while their offices stand empty, for example.

Davis added: ‘The exclusion of many solicitors from support for the self-employed means that many are struggling. Someone who has earned £51,000 profit in the preceding year is not guaranteed to do so again and is unlikely to have built up the savings to survive for a protracted period without income.

‘Crucially, there must be also be support package in place for those legal practitioners who are paid via dividends. Under the current schemes such people will only be able to receive a minimal amount of support, possibly no more than £575 per month. This could be solved by extending support to sole practitioners operating via a professional service company.’

*The Law Society is keeping the coronavirus situation under review and monitoring the advice it receives from the Foreign & Commonwealth Office and Public Health England.