PAUL Hollywood’s wife Alex has accused him of cheating with his 23-year-old barmaid lover in bombshell papers ahead of their £10million divorce battle.

The star’s wife is furious at what she claims are lies about their split.

Alex, 54, disputes that the TV presenter only started a relationship with barmaid Summer Monteys-Fullam after the marriage breakdown.

A source said: “Alex has filed for divorce on the grounds of adultery.

“She’s fed up of the lies. For example Summer’s claim that the relationship started ‘way after the marriage ended’.” Legal experts said last night that by pursuing a divorce on the grounds of adultery, Alex could force Paul, 52, to divulge damaging secrets about the pair’s marriage in public.

The couple announced the end of their 20-year marriage in a joint statement last November.

Days later The Sun on Sunday revealed Paul had formed a close friendship with Summer who worked at his local pub, the Duke William in Ickham, Kent.

At the time a spokesman for the TV star attempted to play down any link between the pair, saying they had “only ever been cordial and certainly not romantic”.

And when Summer gave an interview this April she insisted the relationship had started “way after” his separation.

Hollywood and his wife ended their marriage within days of a break in Italy.

A source said: “Alex and Paul spent a lovely family holiday away in Venice just a few days before they split.

“She was later horrified when Summer publicly boasted about her relationship with Paul.”

On New Year’s Eve Summer posted a message saying: “I can only thank my amazing family and boyfriend. I have had my fun and I have had my troubles.

“But I can only take that as the path I was meant to lead.

“I can only thank the people that are close to me including my amazing boyfriend.

“You have turned me from a girl to a woman and to a house woman. I love you so much.”

Summer had modelled for a bridal magazine before meeting the master baker in 2017.

She quit her bar job after pals ribbed her when pictures emerged showing Paul dressed in a Nazi uniform.

Earlier this year Hollywood and Summer moved to a rented £2million home in a remote part of the Kent countryside.

They were also pictured on a £10,000 holiday in Mauritius in March after jetting away separately to avoid publicity.

It emerged that Summer had nicknamed Hollywood “Cake Cake”, a nod to his baking stardom.

And it was reported that he had loaned Summer a chauffeur-driven Rolls-Royce to celebrate her birthday with friends last year.

In 2013 Hollywood and Alex split after he admitted an affair with US chef and author Marcela ­Valladolid.

They had appeared together as judges on The American Baking Competition.

Paul and Alex soon patched up the marriage.

And in an interview he admitted: “I did have an affair in America with my co-judge.

“It was the biggest mistake of my life because actually I still love my wife . . .

“We are talking, working together but it’s going to take time.

“I was shocked about the whole thing kicking off the way it did . . . but I deserved it and I’ve taken it. It was my punishment.”

Last week Hollywood and Summer were on holiday in Cyprus.

Pictures posted on social media showed the pair enjoying drinks with pals in a bar.

Keen biker Hollywood was spotted riding through the mountains while Summer lounged by a pool.

Before finding fame on Bake Off, Hollywood was a chef at a hotel in the Cyprus resort of Paphos, where Alex was working as a dive instructor.

The pair wed on the island two years later and have a son, 16.

In an interview before their split, Alex said: “Life was good for us in Cyprus. We lived in a beautiful villa with a pool, and Paul would roar around on his big motorbike, while I had my moped.

“We were incredibly happy and shared a passion for food. That’s what brought us together.”

Later this year Hollywood will begin promotional work for the next series of The Great British Bake Off.

He was the sole judge to stick with the show after it switched from BBC to Channel 4, a move which earns him a reported £400,000 a year. 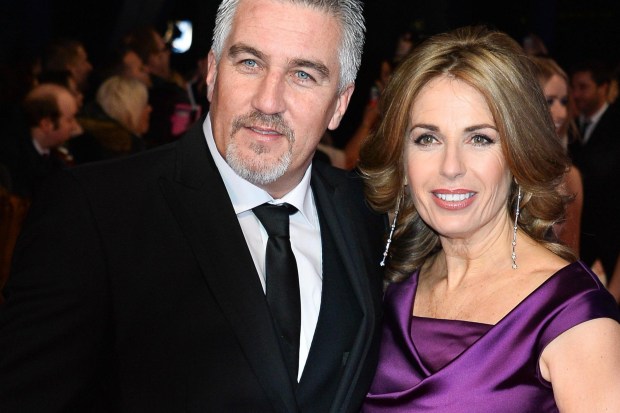 March 2013 Paul travels to host the US version of Bake Off with American chef and author Marcela Valladolid.

They have an affair.

He splits from Alex but they get back together.

Paul loans her a Rolls-Royce to take her to Canterbury with friends.

October 23, 2017: Paul is photographed on holiday in Venice with Alex.

November 20, 2017: Hollywood and Alex announce their split in a joint statement.

November 26, 2017: The Sun on Sunday reveals his friendship with Summer.

His agent says: “Reports of a relationship between the pair of them are untrue.

They had met when Paul had been in the pub, but only ever cordial and certainly not romantic.”

January 1, 2018: Summer posts her gushing love letter on social media, but deletes it.

April 19, 2018: Summer says publicly that the relationship began “way after” the marriage ended.

But it is understood that Paul is concerned that interviews about the upcoming show could force him to address speculation about his love life.

Alex is continuing to forge her own career as a cook and is planning a third book of recipes.

A source said: “Alex wants to start afresh and live her life. She’s a strong woman and wants to move on.”

TV insiders expect the new Bake Off series to start on August 28, though Channel 4 are yet to confirm the date.

Katie Price sunbathes with horse outside messy mansion amid ‘bankruptcy’

The final episode of the last series was watched by 11million viewers — the station’s second biggest audience in its 36-year history.

It smashed viewing targets and confirmed the show as a ratings success after executives poached it from BBC1 for £75million.

No big cash for adultery

YOU don’t get a bigger payout for adultery.

The courts understand marriage is complex and there is more than one way to break it.

There are no rules on the financial outcome.

The courts will look at whether there is a prenup, when the money was built up and how, and try to meet everyone’s needs.