How to Overcome Confirmation Bias in High Conflict Divorce


Confirmation bias is a psychological concept associated with scientific research, investigations of crimes, and everyday beliefs. It occurs when a person jumps to a conclusion and then seeks evidence to prove that they are correct, even when they may be wrong. This often occurs in high-conflict divorce cases, which often involve the intense emotions and confusing behavior of one or more people with traits of Cluster B personality disorders (narcissistic, borderline, antisocial, and histrionic)1 as described in some of my prior posts.

Confirmation bias can happen about many issues, especially when a child resists or refuses to spend time with one of their parents. Emotions are high, facts are few, and big decisions need to be made based on understanding the cause of this resistance.

Divorcing parents, their family members, friends, and even professionals often jump to conclusions about whose fault this is. Some may jump to the conclusion that the rejected parent has abused the child and, therefore, the child has become “estranged” from that parent. Others may jump to the conclusion that the favored parent has “alienated” the child from the rejected parent. Both of these explanations are possible, as abuse and alienation are real problems in high-conflict divorces. Accurately figuring out what has occurred requires careful efforts to avoid confirmation bias. 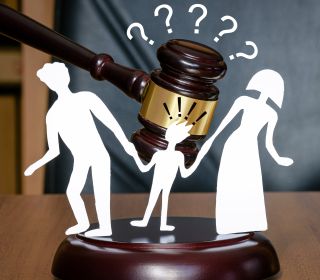 An example of the destructive potential of confirmation bias was exposed in the 1990s when many innocent childcare center workers were sent to prison with decades-long sentences for child sexual abuse based on interviews with children that were tainted by interviewer bias.

Once these faulty interviews were exposed, it became clear that the children’s dramatic statements were fabrications that grew out of interviewing techniques. (Such as: “We know ____ hurt you. When you tell us the truth, then you can go home.”) The innocent workers were released, and thorough interviewer training was implemented to avoid these mistakes in future cases.

As a book published by the American Psychological Association, Jeopardy in the Courtroom, described it: “Interviewer bias characterizes those interviews where interviewers have a priori beliefs about the occurrence of certain events and, as a result, mold the interview to elicit statements from the interviewee that are consistent with these prior beliefs.” And “When questioned by adults, children sometimes attempt to make their answers consistent with what they see as the desire of the questioner, rather than consistent with their knowledge of the event.”2

Unfortunately, this same confirmation bias can arise with older children in a highly contentious divorce, when a parent is abusive or too aggressive toward a child and pushes them away (estrangement) or when a parent recruits the child to take their side (alienation). In many such custody disputes, the child might be briefly interviewed by a court counselor, a lawyer for the child, or even a judge. Yet few are trained to really keep an open mind in figuring out these cases. I am regularly asked to consult with parents and lawyers on such cases and find that decisions have often been made based on confirmation bias.

For example, suppose an 11-year-old tells an investigator or decision-maker: “I can’t stand to be around my father. He embarrasses and humiliates me. A few years ago, he knocked me down on the floor because I sassed him. He doesn’t understand me at all. My mother totally gets me and what I need.” Rather than simply “collecting allegations from the children”(an error described in the APA book, which can make things worse)3 the child should be asked follow-up questions: “How does he embarrass and humiliate you? Can you give me a specific example? Has he knocked you down on the floor or done anything physical to you since then? What does your mother say about him? What are their different styles of discipline with you?”

In some cases like this, the answers point toward other aggressive behavior by the father, causing estrangement, and in other cases, they point toward a lot of disparaging remarks by the mother, causing alienation.

In some cases like this, it turns out that the mother regularly screams at and intensely criticizes the child causing estrangement, and in other cases, it turns out that this dramatic language came from the father repeating these phrases for years causing alienation. The child eventually absorbed this and used it in a dispute over being punished for misbehavior by a reasonable mother.

To make the wrong decisions in these cases often means placing the child alone with a disturbed parent and allowing little or no contact with a reasonable parent.

Consider Three Theories of the Case

The way to avoid confirmation bias in such cases is to keep an open mind and consider at least three theories of these high-conflict cases when one person says the other is abusing a child: 1) Allegations of abuse are true, 2) allegations are false, or 3) both parents are contributing relatively equally to the child’s resistance and refusal. While these considerations may seem obvious, high-conflict emotions often hook everyone involved to take one side or the other and lose any objectivity in figuring out what should be done.

For this reason, everyone should stay calm and focus on finding out the full facts of the case with an always-open mind. This should apply to all issues in a high-conflict divorce. Parents and their lawyers should focus on presenting useful information and specific examples of the other parent’s high conflict behaviors, while evaluators and judges should consider all three theories of the case and assure everyone that they have done so.