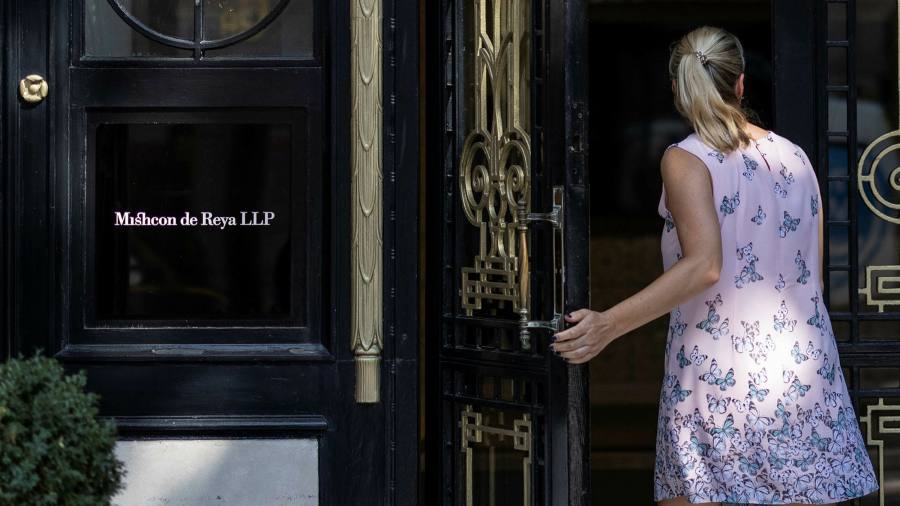 
Lawyers are not known for their love of risk. But a growing number of UK law firms are following their US peers and betting on the outcome of cases in return for a share of the winnings, through closer links with litigation funders.

City law firm Mishcon de Reya — which plans to float on the London Stock Exchange as early as this year — announced a deal with Harbour Litigation Funding this month to set up a litigation financing facility.

It follows London-headquartered Rosenblatt, which set up its own litigation funding unit last year called LionFish Litigation Finance. Others, such as DLA Piper, have entered the market through striking deals with existing players. Funders say they expect more such tie-ups with law firms.

Litigation funders back the cost of a dispute in return for their investment back and a multiple of costs or share of the winnings. For claimants it offers a way to reduce the spiralling costs of big-ticket litigation or finance an otherwise unaffordable dispute.

The sector has expanded in the UK as investors have sought higher returns in an era of ultra-low interest rates. Britain’s litigation funders had £2bn in assets in April according to law firm RPC — double the amount three years previously.

Harbour, one of the world’s largest third-party funders, has committed £150m to its facility with Mishcon, which will sacrifice a chunk of its fees and share in the upside of successful cases.

But close relationships between law firms and funders have raised questions from some in the industry about conflicts of interest. The sector is self-policing despite calls for transparency, putting a soon-to-be listed law firm like Mishcon under greater scrutiny.

Litigation funding is a $39bn global industry according to data from law firm Brown Rudnick, fuelled by billions of dollars from hedge funds and private equity groups.

Yet tie-ups between law firms and litigation funders have until now been more common in the US than the UK due to a culture of contingency fee deals, such as no-win no-fee agreements, among American firms.

The ability to profit from damages-based agreements [DBA], in which lawyers take a share of a clients’ winnings, only became possible in the UK in 2013. Actively helping potential clients fund their cases is a step further.

“For this to work, law firms have to be able to take on risk and get enough upside to make it worthwhile,” said Christopher Bogart, chief executive officer of litigation funder Burford Capital.

The group funded the UK’s first law firm portfolio deal — in which a funder agrees to finance a series of cases — with Shepherd and Wedderburn in 2017. “[Such deals] have been less common in the UK because DBAs have not had the uptake that people thought they would,” he added.

Closer links between law firms and funders raise potential hurdles: lawyers are duty bound to act in their clients’ best interests, but the presence of a third party funder adds a potential conflict of interest to the mix.

Lawyers say funders are not legally allowed to control a dispute, and deals are carefully drafted and approved by clients. Firms — including Mishcon and Shepherd and Wedderburn — operate non-exclusive relationships with funders too, to ensure they can shop around for the best deals.

However others have pointed to potential difficulties. Rosenblatt introduced a prohibition on LionFish Litigation Finance from funding its own cases. Chief executive Nicky Foulston says: “Because Rosenblatt advises the client on the funding agreement and LionFish is owned by the same parent company, LionFish cannot fund a case Rosenblatt is acting on as there is a potential conflict of interests.”

Richard Leedham, a disputes partner at Mishcon, says the firm will comply with “all the rules about funding”, including “the fact that funders are not allowed to control the claim”. Mischon’s new unit will only fund Mischon cases.

He argues that litigation finance provides a lifeline to claimants who would otherwise have been unable to bring a case to court. In April, 39 sub-postmasters succeeded in overturning their convictions after the Post Office wrongfully criminalised them, in a case funded by Therium, one of the oldest funders.

“[In that case] we had a group of small businesses who could not have taken on an insurer on their own in a pandemic,” says Leedham. “Where you have individuals or groups suing a large company you really need funding to make it work.”

However others in the industry remain critical of the potential for conflicts of interest. Former Irish Law Society president Geraldine Clarke said managing a three-way relationship could be “challenging”. Litigation funding is not permitted in Ireland. “If it’s true that he who pays the piper calls the tune then where does it leave the client? The relationship between the client, the funder and the lawyer needs to be finely balanced,” she said.

The sector polices itself through the Association of Litigation Funders, an industry group. The Financial Conduct Authority authorises some funders, but does not regulate the activity of litigation funding, and deals can be opaque.

Brown Rudnick partner Elena Rey is leading a litigation funding working group to tackle that issue. She said: “Standardised litigation funding agreements will improve transparency . . . for the industry to continue to flourish, high standards need to be the norm.”

Shareholders have grown nervous about the nature of litigation funding assets in the past too, which can be hard to value. In 2019 the accounting that Burford Capital uses to value its cases was criticised by prominent US short seller Muddy Waters, triggering a 50 per cent fall in its share price. The company subsequently overhauled its governance but has stood by its method of accounting.

Leslie Perrin, chair of trade body the International Legal Finance Association says: “I think funders should be more open about investments they’ve made . . . if the enemies of investment finance say we’re scruffy scuzzy people of no great moral standing then we need to be able to stand up and show that’s not the case.”

Funders say heavier regulation is not needed, in part because the courts and Competition Appeals Tribunal act as a check and balance on egregious deals and judges weed out abuses of process.

“We’re not regulated in a conventional sense but we have defendants wanting to disrupt our arrangements and a court with all the power it needs to get involved — that’s a good way of keeping everyone in check,” says Neil Purslow, founder of Therium.

He says a bigger issue for tie-ups between law firms and funders has been when firms have failed to produce a pipeline of cases. Funders reduce their risk by offsetting the losses from cases in the portfolio with future winnings — meaning a strong pipeline is essential.

Mishcon says it has strong demand however, as shown by the $200m already committed by Harbour to fund cases at the firm. “There’s a healthy pipeline of cases and we hope to be using [the facility] pretty promptly,” says Leedham.