Previous postCourt backlog 'may not return to pre-pandemic levels for another year' - Raab
The Guardian view on predatory marriage: new safeguards are needed | EditorialNext post 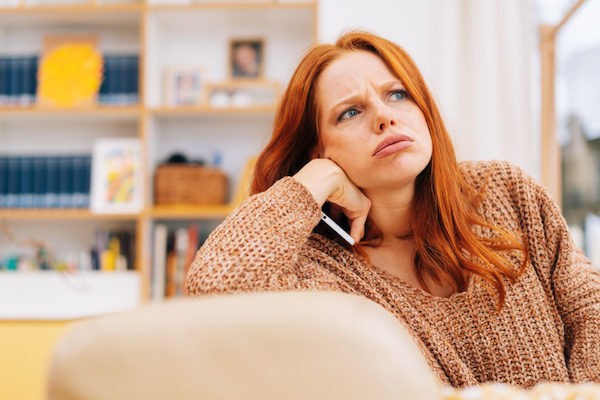 Is He Not Interested Anymore Or Just Busy? Sweetie, Let’s Talk

“What the hell?” a divorced woman asked on a Facebook group page. “Is he not interested anymore or just busy?” Here is her story in a nutshell and my advice on why she shouldn’t be asking “What the hell?” but rather facing the truth: no one’s too busy when it comes to love.

This woman (who is divorced with children) connected with a guy she grew up with on a dating app. After a few text exchanges, he told her he didn’t want to date a woman with kids. She reached out to him after hearing some sad news about a mutual friend. They decided to meet at a bar he goes to often. They hit it off immediately, kissed in the bar, went home together and had sex.

She texted him again a few days later and his response was a smiley face. She then called him. He has not called her back.

Sweetie, I hate to have to be the one to tell you this, but he is not interested anymore. He’s not just busy. In fact, he was never interested. I’m not trying to upset you or make you feel bad about yourself, but I have to be honest so you can move on and feel better about yourself because you deserve better!

First of all, why are you surprised at how all of this has unfolded? You basically chased him. Why would you subject yourself to that?  What happened to your standards? Your self-respect? Your self-esteem?

I guess what I’m really wondering is, when did the bar get so low? Do you think because you are divorced and a single mom that you can lower your standards to the point of having this guy treat you like crap?

Listen to me. This guy is not for you. He’s also a jerk. Let’s begin with the fact that he said he didn’t want to date someone with kids. I actually respect his honesty, and has the right to feel that way. I would not judge him for that.  But, why would he agree to go out with you unless he was only in it for a fling? He wouldn’t. That makes him a user in my opinion.

But, I now have to give you some tough love. You sort of did this to yourself. You knew what you were getting into when you asked him to get together and you knew he didn’t want to date someone with kids.

Did you think he was going to have such a wonderful time on the date, that all of a sudden he would change what he wanted in a woman and want to be a stepfather?  In effect, he had already broken up with you before you even went out. So, why would take the risk? Why would you want to set yourself up to feel shitty?

Please like yourself more than to treat yourself that way.

To make things worse, you slept with him. I’m not judging you for having sex on a first date (even though I’m not a huge fan of it.) But, I’m judging that your subconscious knew he wasn’t interested in you. You knew it before you even met! So, unless you wanted a no-strings-attached affair, (which you didn’t, otherwise you wouldn’t have called him a few days later) why would you have sex with him?

Don’t you deserves to have sex with a man who wants a relationship? A man who will text you 5 minutes after you leaves his house?? Don’t you feel you deserve a man to be completely into you and love and cherish and adore you? –especially after the devastation of a divorce!

Another red flag by this jerk: sleep with you and then nothing. No text, call, contact. So mean. One option would have been to call  and say he just wanted to be friends, that it was nothing personal, but that he didn’t want to date someone with kids. That would have been the classy thing to do. Instead, he goes dark. AND, you knew each other growing up! That’s even worse! How can you do that to someone you grew up with, let alone anybody? I just don’t get it.

Lastly, why would you then text and call him?? Why are you chasing him? All that does is make someone feel even worse about themselves. Trust me. I’m not judging you because when I was younger, I let a few men treat me badly, and ran back for more. So I get it. I just hope this experience makes you realize that you deserve so much better.

When people are dating after divorce, we owe it to ourselves to not settle, to recognize red flags, and to make sure we get rid of anyone treating us even remotely badly . I know it’s hard. No one wants to be lonely or be alone. And I know it’s hard to meet people, so people dating after divorce tend to brush red flags under the rug, because they think “Maybe this is the best I can do.” I do understand that and I am empathetic.

But, my advice to anyone who wants to be in a truly happy and fulfilling, authentic relationship is to make sure that you feel like you are in heaven, and that means staying away from guys like this guy, reading the signs pretty quickly, letting yourself see those signs, and having the courage, willpower and self-pride to jump ship.

Like this article? Check out, “9 Signs of a Healthy Romantic Relationship”